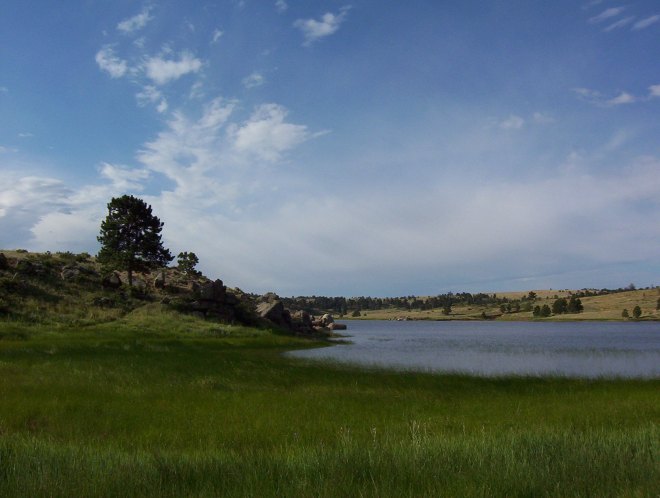 2014 Update: Recreation at North Crow Reservoir is now managed by Curt Gowdy State Park staff. Restrooms have been built at the two major parking lots, but camping is not permitted.

July 4th weekend our family drove out one morning to North Crow Reservoir to our favorite access point, only to find an encampment at the side of the parking lot numbering half a dozen tents and including girls in pink pajamas, men in lawn chairs and loose dogs lounging.

There are no signs banning camping at North Crow Reservoir, but there are also no amenities. I know that if I go back now, a few weeks later, I’m going to find little toilet paper flags behind every bush and tree within 100 yards of the roads warning me to watch where I step.

A whole book has been written about dealing with toilet issues in the outdoors, including digging little holes for deposits, but in a heavily used area this is not a conscientious option. My preference is to put everything under a dry cowpie or rock for natural decomposition with less unsightliness. I have a friend who takes her used t.p. home in a plastic bag.

Some of the vehicles parked by the encampment may have belonged to people fishing. We’re used to seeing up to half a dozen during ice fishing season. However, by nature of their skittish quarry, fishermen are a quiet bunch compared to campers.

We opted for another parking area with only one parked vehicle and no loose dogs. The men in my family headed out with fishing poles, and the dog and I, rather than hike around a lake wreathed in tents, opted for higher country and hopped the fence into the national forest.

Summer is a crowded season for birds too. I wonder what the resident species think when the migrants move in for the summer. And everyone has noisy children begging for food.

Last year’s young, the teenagers so to speak, don’t fit in and head for the fringes, the marginal habitat. That’s the story of the American white pelican.

It may show up in any Wyoming reservoir – some have even been seen on F.E. Warren Air Force Base this summer, but the breeding records show only a few specific reservoirs, actually have breeding pelicans.

There’s a chance though, that the young may begin to feel at home in one of the marginal areas, perhaps the fishing improved, and they’ll be the ones to settle new territory.

As long as I bring along food and water (and toilet paper), I too can explore new territory, though, with the number of cowpies where I was hiking, it’s evident this was merely a pasture some cowboy probably knows like the back of his hand.

The dog and I hiked up hill after hill to see what was on the other side, enjoying landscape unmarred by empty beverage containers. The idea of rattlesnakes crossed my mind briefly.

One branch of my family settling in Wisconsin in the 1850’s must have been considered reckless adventurers by their folks back in the old country. The way sport utility vehicles have become so popular, I’d be willing to say the American quest for the rugged frontier must be genetic.

Looking back from the top of the last hill I wanted to climb, the holiday encampment was only a dime-sized spot on the edge of the water. It was getting hotter. Grasshoppers were bouncing off my shirt.

It was time to go back to civilization for a little shade and let the dog get his feet wet. Down by the creek the trees were thick with birds and bugs.

Before my fishermen were ready to leave, six more vehicles showed up.

It was ironic that two evenings later, standing in my own city neighborhood, a herd of pelicans passed directly over my head. They’ve been known to stop over at Holliday Park.

I suppose in the pelican world that would be considered a reckless adventure. 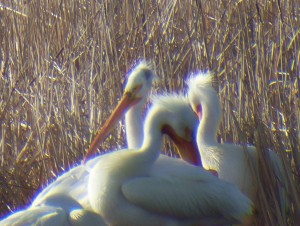 Three American White Pelicans gather at the edge of a small lake in Cheyenne, Wyoming. Photo by Barb Gorges.

Published June 5, 2011, in the Wyoming Tribune Eagle, “Pelicans at Holliday Park: Why do they stop here?”

2014 Update: This last winter, the city decided to improve Lake Minnehaha, making it deeper to eliminate algae blooms caused by shallow water. They also removed the island to discourage goose nesting. Time will tell how these changes will affect the birds at the park. American White Pelicans also visit other small lakes in the area.

The “American White Pelican,” with its fantastic orange bill, seems more akin to a unicorn than any bird. My first sighting, above a river on the dry plains of eastern Montana, seemed out of place. But to see a flock at Holliday Park, in the middle of Cheyenne, seems miraculous.

Last year I tracked my sightings of pelicans on Lake Minnehaha, in the park, and between April and July, on the three or four mornings a week I was there, I could almost always see a few.

I didn’t observe any of the courtship antics like the geese go through. The pelicans were either clumped together on the north side of the island, like a forgotten snow bank, ignoring the ruckus of nesting geese a few feet away, or they were out elegantly sailing on the water, dipping their bills in, and catching fish, or just loafing. A few times I saw them sail into thermals overhead, wing flapping hardly a necessity.

Why do we see pelicans at Holliday Park? In April, some may be migrating. They winter along the Gulf of Mexico and head for the western states, Colorado, Wyoming, Montana, the Dakotas and western Canada, to breed. Pelicans on the other side of the Continental Divide spend winter in coastal California.

They look for big lakes in isolated places that have islands for breeding safely, such as the Great Salt Lake. In Wyoming there are three colonies: Bamforth National Wildlife Refuge, Pathfinder Reservoir and Yellowstone Lake. Any disturbance will cause them to abandon their nests.

Each breeding pair looks for a sub colony where everyone else is at about the same stage in the breeding cycle. The nest is whatever a sitting pelican can pull up around itself with its bill. A parent keeps the two eggs warm underfoot and every day or two, for 30 days, swaps places with its mate and goes out as far as 30 miles to forage.

It takes three years before pelicans are old enough to breed so these immature birds spend their summers hanging out. Apparently, Holliday Park, with its shallow water is perfect, despite the burgeoning flock of domestic and Canada geese and all the people walking dogs.

I sometimes wonder what the uninformed observer thinks pelicans are. Mutant swans or domestic white geese? At 16 pounds, they are much bigger than most geese and a little smaller than trumpeter swans. But at 108 inches, or nine feet, their wingspan is much longer than a swan’s.

The brown pelican found on the coasts dives for fish, but the white pelican merely dips its pouched bill while swimming. These are the pelicans that are famous for synchronicity, forming a line and forcing small fish into the shallows of rivers, lakes or marshes where they can be scooped up. They also fish at night, by feel, rather than by sight.

Down around the Mississippi Delta, they are the bane of aquaculture, feeding at fish farms, but out here they eat the rough fish and are generally not in competition for sport fish.

In the early 20th century their populations decreased, but in the 1960s they began to make a comeback. So your chances of seeing a pelican, compared to a unicorn, are pretty good, especially if you stop by Holliday Park on summer mornings.