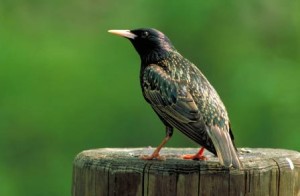 Published Feb. 19, 2004, in the Wyoming Tribune Eagle, “Starlings aren’t the darlings of the bird world.”

2014 Update: At www.eBird.org, under the Explore Data tab, use the “Range and Point Maps” feature to see the worldwide distribution of starlings.

The European starling has done as well as any immigrant left to fend for itself in the middle of New York City. It was introduced in 1890 by Shakespeare aficionado Eugene Scheiffelin (also spelled Scheffland) who, as head of the American Acclimatization Society for settlers from Europe, wanted to bring to his new home all the birds mentioned by the bard.

The starling’s legendary success, nearly 200 million individuals in North America and spreading worldwide, has come at the expense of native birds such as bluebirds, nuthatches, swallows and woodpeckers—all species that nest in cavities coveted by aggressive starlings.

Though in Europe, their native land, starlings might be prized as caged pets because of their ability to mimic, or as canned “pate de sansonnet,” meat pie of starling, I was reminded by recent phone calls that here they can be pests.

Callers want to know how to keep large flocks of starlings from roosting in their trees and buildings and leaving all that whitewash. They have reason to be concerned as starlings can transmit diseases to people and livestock and their droppings encourage the growth of pathogens. Starlings also eat crops and contaminate livestock feed.

The first step is to determine whether the birds observed are starlings because all birds in the United States are protected by law except for pigeons, house sparrows and starlings.

Starlings are chunky little birds, short-tailed and short-winged, which appear black, somewhat iridescent, though in the fall new feathers are tipped in white, like little stars. By spring the stars wear off and their bills become bright yellow.

A quick look at a field guide shows that other black-colored birds have easily distinguished differences.

Starlings showed up in Wyoming in the 1930s and are now found in human-modified areas throughout the state. They are classified as predacious birds that can be taken in any manner except as restrictions apply to methods. Catherine Wissner, at the University of Wyoming Cooperative Extension office in Cheyenne reminded me that it’s illegal to use firearms in the city.

Stan McNamee, director of the Laramie County Weed and Pest District, advises against chemicals except where starlings have invaded a contained area such as a barn. It’s highly likely that without confinement, other kinds of birds would be poisoned as well. He said the most effective chemical requires licensing.

Non-lethal methods of dealing with starlings are based on making them unwelcome. Wyoming Game and Fish Department biologist Steve Tessmann recommends a publication available at the Cheyenne office, “Home owner’s guide to resolving wildlife conflicts.” He said a few nights of sporadically flashing floodlights could disrupt roosting starlings and run them off for good.

Fluttering mylar strips as another deterrent were recommended in a University of Florida Cooperative Extension bulletin. I suppose I should be grateful for the remnants of a plastic bag left by the wind in the top of one of our backyard trees.

Bob Lee, director of Environmental Management for the City of Cheyenne, recommends trying a modern-day scarecrow, a garden hose sprinkler with an electric eye that shoots water whenever it detects movement.

A Nebraska Cooperative Extension publication I found through the Web site http://www.invasivespecies.gov, recommends limiting food and water available to starlings. In a livestock operation, that means cleaning up grain spills and feeding pellets larger than a half inch in diameter, which is larger than starlings can swallow.

In your backyard, limiting food means avoiding the starling favorites, bread crusts, milo, millet and platform-style feeders, in favor of black oil sunflower seed and tube or hopper feeders that are screened or balanced to keep out bigger birds.

Starlings are always squeezing their messy nests into tight, human-made places in addition to natural cavities, so screening those openings can help. Make sure nest boxes for other birds have no perches in front of the entrances and the entrance holes are sizes that exclude starlings.

It even matters how you prune your trees. Starlings prefer large, densely branched trees, compared to more natural, open branching.

You can also find companies that make obstacles to roosting, spikes and coils and generally barbaric looking items, which can be installed on roofs and other problem areas.

Though the Columbia University Web page on Sturnus vulgaris (Latin for starlike and common) is quite scientific, the author proposed, possibly tongue in cheek, “….maybe combining trapping with a pate production plant would make it (trapping) cost effective.”

A weed or pest is only a plant or animal out of place. Isn’t someone in Wyoming growing chicory as a crop? Marketing pate to bluebird lovers might work. Just so we won’t later mourn the passing of starlings like we have passenger pigeons. But one crafty look from those beady black eyes dismisses that worry.