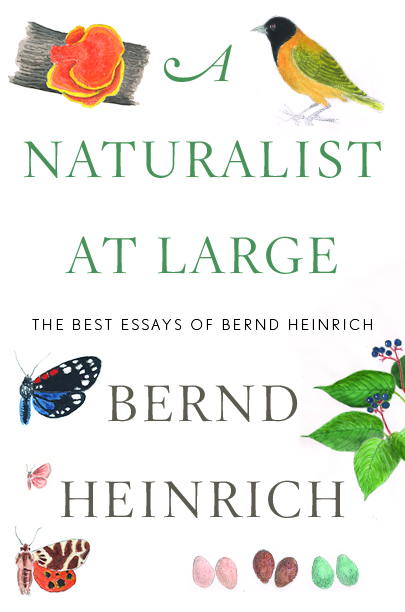 Houghton Mifflin Harcourt has three very different new nature books out this spring: a compilation of nature essays; a cross between trail, travel, nature and history guides; and a guide to using field guides.

I am a fan of this man who finds so many questions to ask and then looks for the answers, even if it means climbing a tree and waiting hours to see where the ravens come back from, or spending hours watching a dung beetle make its ball.

You’ll recognize Bernd Heinrich’s topics of interest if you’ve read his other books including “Mind of the Raven,” “Racing the Antelope” and “Life Everlasting.”

The essays in this new collection were published in various magazines, mostly in recent issues of Natural History Magazine. So, the book title also means the older Heinrich gets, the better his writing. I agree. If his subjects appeal to you, soil, plants, trees, insects, bees, birds, mammals and how living things cope with the universe, you’ll enjoy this book.

I especially liked his investigation of the mechanics of how yellow iris instantly pop from bud to bloom.

The Guide to Walden Pond, An Exploration of the History, Nature, Landscape, and Literature of One of America’s Most Iconic Places, Robert M. Thorson, 2018, $17, 250 pages, full color.

This book won’t mean much if you aren’t familiar with Henry David Thoreau, essayist, poet, philosopher, abolitionist, naturalist, tax resister, development critic, surveyor, and historian. Or his two-year experiment begun in 1845 living in a tiny, bedroom-sized house he built himself at Walden Pond, outside Concord, Massachusetts. You may want to first find a copy of his book, “Walden.”

Thoreau’s fame helped the state set aside 335 acres as the Walden Pond State Reservation (see https://www.walden.org). And he has inspired many conservationists with words such as, “In Wildness is the preservation of the World.”

Robert Thorson sets up his book as a trail guide and while taking a Thoreau-styled amble around the pond the reader gets a mix of history, natural history, biography and lots of beautiful photography. 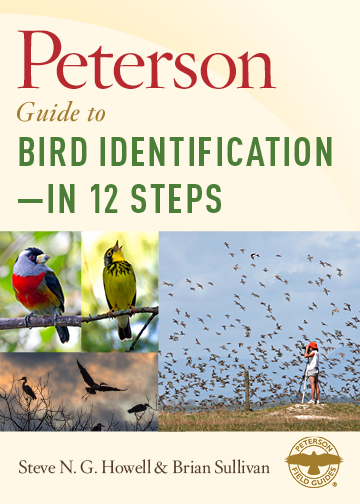 This is a small book full of well-illustrated information that should be at the beginning of every bird field guide.

The intended audience is everyone, the authors say, “We include some things that may be challenging for beginning birders, and others that may seem too basic for those more advanced, but this is intentional.” And that’s why you’ll want your own copy to study over and over.

Step 1 – Make sure you are looking at a bird. What kind? Duck, hawk, songbird?

Steps 2, 3, 4 – Where are you geographically, habitat-wise and seasonally? Despite some birds getting spectacularly lost (and becoming the rarities birders dream of), you can assume a species of bird will show up when and where field guides say it will.

Step 5 and 6 – Is the lighting good enough and the bird close enough to identify?

Step 7 and 8 – Is the bird behaving as its presumed species does? What does it sound like? Getting a handle on birdsong will make you a terrific birder.

Step 9 – Structure–size and shape–makes an easy identifier for birds you already know. Think about those plump robins in your yard. But I would argue it is difficult to use on birds you aren’t familiar with.

Step 11 – Be aware of plumage variations.

Howell and Sullivan’s book makes a good introduction or review as we fly into spring migration. And you can fit in reading it between field trips.

Published Oct. 31 2007, in the Wyoming Tribune Eagle, “In search of great black-backed gulls.”

2014 Update: While we no longer have a family member living in Massachusetts, we have many other family members scattered around the country to keep our birding interesting.

I had a target bird for our trip to northeastern Massachusetts early in October. No, it wasn’t a clay pigeon, but it was a bird I wanted to see.

Houghton Mifflin sent me a review copy of the Peterson Reference Guides series volume “Gulls of the Americas” by Steve Howell and John Dunn.

It has 500 large pages–it’s not meant to be a field guide–of which multiple photos of the 36 gull species of this hemisphere in all their various plumages fill 300 pages.

Whenever I had to wait on the phone at my desk the last few months, I would peruse the photos, accounts and range maps.

Knowing a trip to the North Shore (north of Boston) was coming up, I checked for a new gull species I might see.

The great black-backed gull caught my attention because it might be easy to identify. It’s the largest gull in the world, according to Howell and Dunn. And of two black-backed gull species on the east coast, it’s the one with pink legs.

The upshot of reading Jonathan Livingston Seagull is that I noticed gulls, tried to identify gulls and gave up gulls by age 16. So it was much to my surprise that another literary connection gave me my first look at a great black-back.

We went to Salem for the day and walked over to the House of Seven Gables that inspired Nathaniel Hawthorne’s novel. Tickets were $13 each for a 30-minute tour. We balked and followed other tourists down a side street for a great view over the fence. We were also at the edge of the harbor and when I turned around, there were a couple of great black-backed gulls. Eureka!

The next day, out on the half-mile long breakwater in Gloucester Harbor, at Massachusetts Audubon’s Eastern Point Sanctuary, great black-backs were lined up on the slabs of granite, dozens of them imperturbable as people passed within five feet.

I overheard one woman tell another what pests they were, pooping on her boat cover.

Oh no, my target bird turned out to be a trash bird–too common and pesky to be appreciated by the locals.

Of the 33 photos of great black-backed gulls in the gull guide, I wonder if the photographers were able to stand as close to their subjects as we were.

Even the few herring gulls were patient, their yellow eyes glinting at me.

It was quite another experience to have a chickadee with a glint in its eye hover five inches from Mark’s nose later that day when we found our way to Ipswich River Audubon Sanctuary, a few miles southwest of Ipswich.

It was way too muggy and hot for the middle of an October afternoon–and autumn so far had been too warm for the trees to have changed color much.

We expected the birds to be quiet, but as soon as we stepped from field to forest, we were surrounded by a flock, including the one that inspected Mark.

How odd. Was it some kind of enchanted chickadee? And wasn’t that other inquisitive bird some kind of titmouse? Why couldn’t I find one like it in my field guide?

The next day, while waiting for our son to finish classes at Worcester Polytechnic Institute, we explored Mass Audubon’s (as the state organization is known informally) Broadmeadow Brook sanctuary near Worcester.

The woman at the desk explained the Ipswich River sanctuary was known for its tame chickadees that will eat out of your hand.

Oh no, if only we’d known the local custom! Now there’s a whole flock that thinks birders from Wyoming are stingy.

Broadmeadow Brook turned out to have invisible birds.

For 15 minutes we listened to a flock making loud chipping calls high in the trees, but we never caught sight of one single bird.

Duh! At home, in my hurry to pack and get to the airport, I’d picked up my favorite field guide, Sibley’s western guide, which is not adequate back east.

For a week we explored the northeast quarter of Massachusetts, an area approximately the size of our Laramie County. And still, we didn’t see everything or spend enough time anywhere.

We avoided Boston and most museums and attractions this trip in favor of natural areas, accidentally finding Harvard Forest, where signs invite hikers to follow a trail through the hemlocks.

We visited four Mass Audubon sanctuaries, including the tiny one on Marblehead Neck surrounded by houses. There are 40 more, for a total of 32,000 acres. There are also a number of state parks and forests.

Away from the cities, along the small, winding roads, there is the occasional yellow sign cautioning “Thickly Settled” when approaching some tiny hamlet.

The area is thick with trees as well. I have to say that though I enjoy trees as much as anyone, I was happy to return to the Great Plains where they can be individually contemplated and birds are neither enchanted nor invisible.

And here at home, if the great black-backed gull chooses to make its first Wyoming visit, having already been as far as Colorado a few times, there aren’t a lot of yacht covers to ruin.