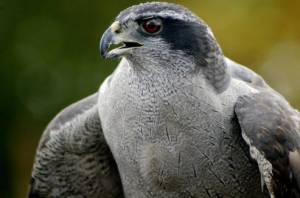 Published March 5, 2008, in the Wyoming Tribune Eagle, “On tail of secretive goshawk; Twice it’s been denied endangered species listing because too little is known.”

2014 Update: I was able to see two of the three goshawks found December 2013 on the Cheyenne Christmas Bird Count and another Feb. 15, 2014 in a tree in the Cheyenne Botanic Gardens grounds.

The northern goshawk is not a bird on my life list despite my having lived all of my life within its North American range, roughly north of Interstate 80 and in the Rockies and west.

However, I have never lived within its habitat, the forest. Years of forest recreation and birding with experts has never led me to a glimpse of the gray hawk with the white belly, even though it is a large bird: 2 pounds, 21 inches long with 41-inch wingspan.

The Sibley Guide to Birds describes the goshawk and the other two accipiter species, Cooper’s and sharp-shinned hawks, as difficult to identify-though I’m pretty sure it is the sharp-shinned terrorizing my feeder birds. Accipiter species have the short, rounded wings and long tails that allow them to navigate in the trees. Other hawk species prefer the wide open spaces.

The goshawk is listed as a sensitive species in six of the eight US Forest Service regions, including Region 2 which includes most of Wyoming.

It is a “management indicator species” which means it is potentially sensitive to habitat changes, especially since it requires large trees for nesting.

Twice the goshawk has been denied listing as a threatened or endangered species because it was ruled that there was not enough information to support either status.

Jeff Beck and two colleagues came up with a system a couple years ago based on a suggested national protocol. He was the local Audubon chapter’s guest speaker last month and is assistant professor of Wildlife Restoration Ecology in the Department of Renewable Resources at the University of Wyoming.

He said traditionally biologists monitored any known goshawk nests for activity each spring. But over time this method shows a downward trend as, I would presume, even with a thriving population, preference for a particular pine tree nesting site might wane as the health of the tree declines over time.

Beck’s team’s job was to design a more statistically satisfying sampling method for the forest bioregion in Wyoming and Colorado.

First they studied 58 known goshawk territories and statistically analyzed them to see what they had in common. Was it slope, the steepness of the mountain side? Or aspect, the direction the slope faced? Or elevation? The predicting factor turned out to be vegetation.

Nesting territories were 4.6 times more likely to be in lodgepole pine forest than spruce/fir forest. This may not be news to falconers who prize goshawks and are also looking for nests–from which they are licensed to pluck young to train for their sport.

Next, knowing from research that a goshawk nesting territory averages 688 hectares, or 1700 acres (and may contain several nests per pair over the years), Beck and his team laid a grid of 1700-acre sampling units on Forest Service land and chose 51 units for a pilot monitoring program.

Finally, field biologists hit the ground twice, once during the time studies showed would coincide with nesting and once during fledging.

In each 1700-acre study unit, the field biologists played a tape of goshawk calls to elicit a reaction from one if it was present. But because the auditory range was only 150 meters (492 feet), there were a lot of acoustical sampling points to cover in each unit.

It’s one thing to draw dots on a map, but it’s another to get to them, to overcome thick timber, steep slopes, swamps, bad weather and bears. Also, goshawks deal with intruders by slamming into them, so everyone had to wear hardhats. Next time you see field biology statistics, imagine all the sweat and stories that go into them.

What Beck and his colleagues found was a 65 to 75 percent probability of detecting goshawks. Also, 33 percent of the samples had goshawks. And, goshawks were 6.5 times more likely to be seen in their primary pine habitat than their secondary spruce/fir habitat.

Using statistics, the team was able to determine how many sampling units would be required to detect a 20 percent change in goshawk population. And they were able to determine that sampling sites closer to Forest Service offices produced nearly the same results as sampling remote sites and so monitoring costs could be reduced.

A long term monitoring program like this could show if the goshawk population rises and falls in a natural cycle. It could show the effects of timber harvesting or recreation pressure, including that of falconers.

But with the pine beetle infestation launching itself throughout Colorado and Wyoming, it will undoubtedly document the goshawks’ reaction to a much larger natural cycle in which, at this moment, their preferred nesting trees are dying.

Will it be easier for goshawks to find prey (rabbits, grouse and squirrels) when the trees are mere skeletons?

If so, will that advantage be offset by the ease with which their main adversary, the great horned owl, might devour their young?

Goshawks are also found in Britain, Scandinavia, northern Russia and Siberia and south to the Mediterranean region, Asia Minor, Iran, the Himalayas, eastern China and Japan. So we can look for information from biologists there and share our findings with them.

Meanwhile, I’ll take a closer look at piles of sticks in large pine trees. Perhaps I should wear a hardhat so I don’t risk my head while adding to my life list.