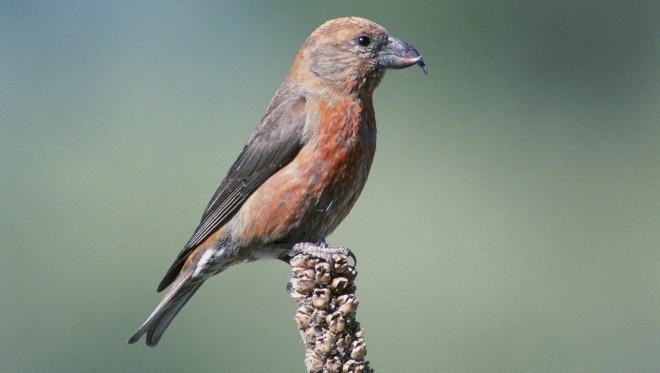 Isolated populations of Red Crossbills have evolved bills that are most efficient for extracting seeds from cones of particular species of trees in their locality. Photo courtesy of U.S. Fish and Wildlife Service.

Published May 16, 2007, in the Wyoming Tribune Eagle, “Professor sheds light on crossbills. Research points to more than one species of crossbill in North America.”

2014 Update: See http://www.uwyo.edu/benkman for more about Craig Benkman and his continuing research into crossbill mysteries.

Crossbills are species of birds that eat seeds from the cones of spruce, pine and other evergreens. Over time they’ve evolved mandibles that cross at the tips. These odd beaks can be slipped between the scales of cones to pry them apart far enough for the crossbills to reach seeds with their sticky tongues.

Both the white-winged and red crossbills can do this. However, the red crossbill was the star of the program given by Craig Benkman last month for the Cheyenne Audubon chapter.

Craig is a professor at the University of Wyoming, in the Zoology and Physiology Department, and is well recognized internationally for his crossbill studies. He has determined that there may be as many as nine types of red crossbills that are candidates for designation as separate species. Red crossbills are found in North America and Europe.

To be considered a species means the members of it either don’t breed outside the group or crossbreeding produces no successful young.

Types of red crossbills are different in size and in the calls they make. They also have different tastes in cones.

While Craig can show you really cool 3-D graphics of his statistics at www.uwyo.edu/benkman, let’s cut to the chase here.

Over the last 5,000 to 7,000 years, red crossbills have evolved their seed extraction methods to such an efficiency that the bills of different populations match seeds of particular conifer tree species. For instance, the red crossbills that work over lodgepole pine have different sized bills than those that specialize in spruces.

Watch a crossbill husk a seed (see the video on Craig’s Web page) and you will see it uses the same side of its bill each time. It has a sharp ridge in the upper mandible that acts as a wedge or hammer and in the lower mandible there is a groove that is perfectly sized for the preferred seed.

Using its tongue to hold the seed in the groove, the crossbill bites down and breaks the seed husk and then removes it. It’s a very efficient system if the bird and the seed are perfectly matched.

Serendipitously, Craig discovered that instead of “collecting” birds, he could use dental impression material on live birds to measure their palates, the inside of their mandibles. He can statistically prove that crossbills with a particular seed preference have a particular groove measurement.

While a crossbill with a pine cone bill can get seeds out of a spruce cone and husk them, it isn’t as fast and it can’t eat as much per minute as the right type crossbill. In this case, time is food is life.

Craig can show that those birds forced to make do with the wrong seed are less likely to survive and less likely to produce young, even if they are in the same forest as the type of crossbill that matches the cones available.

Crossbill breeding is very dependent on having enough seeds. They breed anytime of year, except perhaps late fall, so if a spruce-beaked bird can’t find a good spruce cone crop, it won’t breed until it does.

Craig has studied the crossbills of the South Hills range in Idaho extensively. The lodgepole pine cone crop is quite dependable and the type of crossbill found there has been able to settle down over several thousand years and evolve to match its food source closely.

While individuals of other types of crossbills can be found in the South Hills, in among this resident type, Craig has found that they are unlikely to breed or crossbreed.

If mating should occur between crossbill types, the young might be inefficient at eating seed from all cone types and be doomed to never getting enough seed to be in condition to breed.

The evolution of crossbill beaks continues because trees continue to evolve tougher cones. The trees with the toughest cones will have seeds that survive to grow and produce more seed and trees.

On the other hand, crossbills with the best beaks for the toughest cones will produce more young. Craig calls this the co-evolutionary arms race. However, in many locations squirrels throw a monkey wrench in the works, which is another story.

If red crossbills really are nine separate species, birdwatchers will have to differentiate them by calls. That seems to be how the birds do it themselves.

As a flock, they travel nomadically across the northern forests. They land on a tree and begin sampling cones, calling out their results, so to speak, and attracting others of their type.

Within a few minutes a flock can determine that a tree doesn’t have enough seeds per cone to make it worth their expenditure of energy. Craig has been able to determine that the flock is more efficient at determining this than a lone bird. Remember, time is food is life, so it is better to be part of the flock.

And once in the flock of one type of crossbill, individual birds are unlikely to meet individuals of another type.

Craig and his graduate students continue to research answers to red crossbill questions.

The next question is how much data will it take to prove to the American Ornithologist’s Union, the arbiter of North American bird species designation, that there is more than one species of red crossbill on this continent?

A note in the June 2007 issue of the national magazine, Birder’s World, mentioned Craig’s study and that the South Hills type is currently under review.