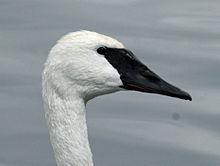 Trumpeter Swans are distinguished by their all-black bills. Tundra bills usually have some yellow markings, though not always, and Mute Swan bills are orange. Courtesy Wikipedia.

The man walking the circumference of Lake Minnehaha was approaching us when he noticed our binoculars and paused to make a remark about the trumpeter swan we were watching.

“Yeah, there was a flock of them here last week.”

“You mean the pelicans?” I asked.

We had seen pelicans about then, but we hadn’t been at the lake when he was. However, it’s unlikely a whole flock of swans would escape notice by the local birding community.

We shrugged, and the man continued on. At least he wasn’t mistaking the white domestic geese that sometimes show up on this small lake at Holliday Park in the middle of Cheyenne.

This particular trumpeter swan visited between about Nov. 8 and 12, feeding on submerged vegetation growing from the lake bottom. It may not have attracted much attention from motorists on busy Lincolnway since, with its head and elegant neck underwater much of the time, it mostly resembled a large white, inflated, plastic bag stranded in a raft of Canada geese, dwarfing them and the other waterfowl.

American white pelicans have thick necks about equal the length of their long, orange bills. By contrast, trumpeter swans have long, slender necks and much shorter black bills. Males and females are indistinguishable unless you have them in hand and check under their tails. The more common tundra swans are smaller and their bills are also black, but with large yellow markings up by the eyes.

The mute swan, star of European fairy tales such as “The Ugly Duckling” (my favorite version is told by Marianna Mayer and illustrated by landscape artist Thomas Locker), has a black and orange bill. Like so many other birds introduced to North America for their entertainment value, the mute swan has escaped domesticity and, in the northeast, is becoming a nuisance to people and out competes native waterfowl.

Tundra swans have been common enough to support hunting seasons in some states, however, numbers for the trumpeter continue to improve more slowly, ever since Red Rock Lakes National Wildlife Refuge in southwestern Montana was devoted to its recovery in 1931.

Originally found across most of North America, by the early 1900s, the trumpeter was nearly completely decimated due to over-hunting for its meat and feathers, loss of breeding and wintering habitats and other effects of increasing human population. Remnant flocks held out in remote places like Yellowstone National Park, where hot springs keep water open in the winter. Red Rock Lakes National Wildlife Refuge in southwestern Montana was devoted to its recovery in 1931.

Ruth Shea, executive director of The Trumpeter Swan Society, told me that today there are about 17,000 trumpeters summering in Alaska, 3700 in western Canada, 3000 in the Midwest and about 300 in the greater Yellowstone area, for a total of about 25,000.

In winter the Canadians crowd into the Yellowstone area. Biologists attempt to disperse the birds to keep them from damaging their food source. Also, having all of your swans in one basket makes the flock susceptible to die-off from any passing disease.

The problem is that when there were less than 100 trumpeters south of Canada in the thirties, the birds lost a lot of their species memory. With swans, migration routes seem to be less inherent in their DNA and more likely passed down by example. They still know how to get as far south as Yellowstone, but old routes beyond seem to be lost.

Ruth expects our trumpeter is like the few other lone birds that show up in central and eastern Wyoming during fall migration. It could be a subadult from Canada exploring new wintering areas, but no one knows for sure. David Allen Sibley’s range maps show rare observations in states across the country, except for the eastern seaboard where there are none.

How did this one swan find our island of city trees and this speck of a lake? Maybe we will see it again, now that we are on its mental map.

But swans have a lot of challenges when they migrate, much like the Ugly Duckling’s. First, when flying with a wingspan of six to eight feet at speeds of 40-80 miles per hour, collisions with power lines become deadly. Next, a trumpeter has to find open, shallow water for feeding—all winter long.

Then, in states where the similar-looking tundra swan is hunted, a few trumpeters are always mistakenly shot. Anywhere waterfowl hunting has been permitted, some swans will die from poisoning by picking up old lead shot as they graze submerged vegetation. And, though the trumpeter is our largest native waterfowl species, standing an imposing four feet tall, coyotes are often successful in bringing it down.

Comparing range maps in old field guides with those published since the 1990s, it is easy to see the results of restoration work. Breeding and wintering ranges in Alaska and Canada have expanded, as has the year-round range in greater Yellowstone.

There’s even a dot of purple over western Nebraska and South Dakota indicating the year round restoration flock there. Ruth mentioned that in nearby northeastern Wyoming, one nesting pair has been documented several years. Other restoration flocks are in Minnesota, Michigan, Wisconsin, Iowa and Ontario, Canada.

Trumpeter swans live 15–25 years in the wild, if we can give them what they need: the right space, natural food and fewer obstacles.

Wouldn’t it be great if trumpeters began to visit Lake Minnehaha so regularly that every casual observer became a swan expert?