Be careful what you wish for: wind development on the Belvoir Ranch has its downsides

This edition of Bird Banter was published Feb. 10, 2019, in the Wyoming Tribune Eagle.

This month marks the 20th anniversary of my first Bird Banter column for the Wyoming Tribune Eagle. I wrote about cool birds seen on the ponds at the Rawhide coal-powered plant 20 miles south of Cheyenne, https://cheyennebirdbanter.wordpress.com/2014/02/12/birding-the-colorado-coast/.

Roundhouse will stretch between I-80 south to the Wyoming border and from a couple miles west of I-25 on west 12 miles to Harriman Road. The Belvoir is within. It’s roughly a two-to-three-mile-wide frame on the north and west sides. All the power will go to Rawhide and tie into Front Range utilities.

We know modern wind turbines are tough on birds. Duke Energy has a robotic system that shuts down turbines when raptors approach (https://cheyennebirdbanter.wordpress.com/2016/09/13/eagle-safety-collaboration/). Roundhouse needs one—a raptor migration corridor exists along the north-south escarpment along its west edge.

But in Kenn Kaufman’s new book, “A Season on the Wind,” he discovers that a windfarm far from known migration hot spots still killed at least 40 species of birds. Directly south of the Belvoir, 125 bird species have been documented through eBird at Soapstone Prairie Natural Area and 95 at Red Mountain Open Space. Both are in Colorado, butting against the state line.

Only a few miles to the east, Cheyenne hotpots vary from 198 species at Lions Park to 266 at Wyoming Hereford Ranch, with as many as 150 species overall observed on single days in May. With little public access to the Belvoir since the city bought it in 2003 (I’ve been there on two tours and the 2016 Bioblitz), only NextEra has significant bird data, from its consultants.

There are migrating bats to consider, plus mule deer who won’t stomach areas close to turbines—even if it is their favorite mountain mahogany habitat on the ridges. The Wyoming Game and Fish Department can only suggest mitigation and monitoring measures.

There are human safety and liability issues. The Friends of the Belvoir wants a trailhead on the west edge with trails connecting to Red Mountain and Soapstone. Wind turbines don’t bother them. However, during certain atmospheric conditions, large sheets of ice fly off the blades–“ice throw.” Our area, the hail capital, could have those conditions develop nearly any month of the year.

The noise will impact neighbors (and wildlife too) when turbines a mile away interfere with sleep. Disrupted sleep is implicated in many diseases.

Low frequency pulses felt six miles away (the distance between the east end of the windfarm and city limits) or more cause dizziness, tinnitus, heart palpitations and pressure sensations in the head and chest. The Belvoir will have bigger turbines than those on Happy Jack Road, reaching 499 feet high, 99 feet higher.

A minor issue is the viewshed. In Colorado, the public and officials worked to place the transmission line from the Belvoir to Rawhide so that it wouldn’t impact Soapstone or Red Mountain. What will they think watching Roundhouse blades on the horizon?

Because this wind development is not on federal land, it isn’t going through the familiar Environmental Impact Statement process. I’d assume the city has turbine placement control written into the lease.

The first opportunity for the public to comment at the county level is Feb. 19. And in advance, the public can request to “be a party” when the Wyoming Industrial Siting Council meets to consider NextEra’s permit in March.

NextEra held an open house in Cheyenne November 28. They expect to get their permits and then break ground almost immediately. This speedy schedule is so the windfarm is operational by December 2020, before federal tax incentives end.

It doesn’t seem to me that we—Cheyenne residents—have adequate time to consider the drawbacks of new era wind turbines—for people or wildlife. Look at the 2008 Master Plan, http://belvoirranch.org.  Is it upheld by spreading wind turbines over the entire 20,000 acres, more than originally planned? People possibly, and wildlife certainly, will be experiencing low frequency noise for 30 years.

At the very least, I’d like to see NextEra move turbines back from the western boundary two miles, for the good of raptors, other birds, mule deer, trail users, and the neighbors living near Harriman Road. The two southernmost sections are already protected with The Nature Conservancy’s conservation easement.

What I’d really like to see instead is more solar development on rooftops and over parking lots in Cheyenne. Or a new style of Wyoming snow fence that turns wind into energy while protecting highways. 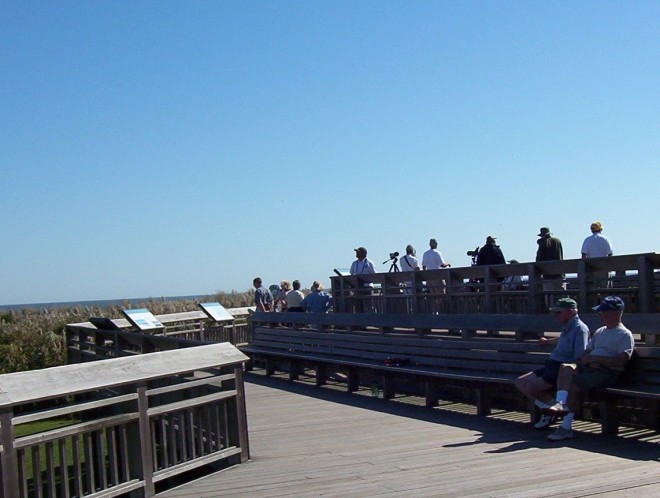 Cape May Bird Observatory’s Hawk Watch platform is famous among birders for the number of raptors that are counted flying overhead in the fall. Photo by Barb Gorges.

2014 Update: Find out about visiting the Cape May Bird Observatory at http://www.njaudubon.org/SectionCapeMayBirdObservatory/CMBOHome.aspx. For a great history, read “Seasons at the Point, The Birds and Birders of Cape May” by Jack Connor, published in 1991.

I have been to Mecca. But it’s Cape May, where bird watchers raise their binoculars to the sky in exaltation of migration.

Midday Sept. 22 did not have a wave of raptors flying over the Hawk Watch platform that overlooks the Atlantic at Cape May Point State Park. I saw only a couple osprey and kestrels.

The best numbers at this southern tip of New Jersey come from passing cold fronts and this day was in the 80’s and sunny. The trip, begun with my mother and sister to visit my aunt and uncle in Philadelphia, miraculously coincided with a lull in damaging storms generated by hurricanes.

Pete Dunne, in 1976 the first to start counting hawks officially for the Cape May Bird Observatory operated by New Jersey Audubon Society, relates the legendary day a year later when unique weather conditions produced 21,800 hawks, almost all sharp-shinneds and broad-wings, giving Cape May the nickname “Raptor Capitol of North America.”

The cape, or peninsula, is formed by Delaware Bay on the west and the Atlantic on the east, making a funnel that gathers the birds on their southward trip into a narrow stream at Cape May Point before they reluctantly cross open water.

Clay Sutton, author of an article in this month’s Birding magazine, published by the American Birding Association, relates another legend. In 1970, 24,875 American kestrels were counted in a single day! However, in 2001 and 2002, kestrels barely broke 5000 for the entire count season, September 1-November 30, though they normally average about 10,000.

While kestrel numbers have declined overall, peregrine falcon counts have improved, from 60 in 1977 to a high of 1,791 twenty years later. Sharp-shinned hawks are the most common, averaging 28,512 per year.

Swainson’s hawks average three, with never more than 10 counted in a year, so far. Being a western species (the hawk most commonly seen over Cheyenne in the summer), one has to wonder how they get so far off course.

A CMBO intern was on hand at the Hawk Watch platform to document any hawks and answer questions, but I was wondering about the white birds in the pond below, and approached another birder for help instead.

Turns out he was also a CMBO intern, hired to count five days a week at the Avalon Sea Watch, a few miles up the beach. It was his day off.

The white birds were a mute swan (an invasive, non-native species that has somehow achieved protection under the Migratory Bird Act, I recently learned), great egret, snowy egret and a mixed flock of laughing gulls (no longer sporting their black head feathers of the breeding season), Forster’s terns and herring gulls, the ubiquitous gull of my Alaskan trip in August.

The Sea Watch was started in 1993 and runs mid-September to mid-December, with mid-October to mid-November being the migration peak. The most abundant species are red-throated loon, northern gannet, double-crested cormorant, brant, surf scoter, black scoter, white-winged scoter and parasitic jaeger.

My relatives and I did not make it to Avalon. But now I understand which migrations CMBO’s late October bird festival targets. It would be a great time to visit again.

There’s also the option of hiring a guide through the observatory. The price is reasonable if you have a small group to share it. It would be worth the help sorting over a dozen other birding hotspots in Cape May County, including national wildlife refuges, Nature Conservancy holdings, and state and private lands open to birders.

The CMBO has a long list of educational and recreational opportunities also, some of which are free.

The daily “Monarch Tagging Demo” coincided with our visit.

Staff and volunteers demonstrated how a small patch of orange scales on the forewing is brushed away and the tiny sticker is placed on the clear membrane, then folded over the edge. The sticker has a unique number plus contact information for the Monarch Monitoring Project.

Monarchs produce several generations over the summer, but only the last one is of the individuals that will head south and hopefully make it to the mountains of central Mexico. Of thousands of tagged butterflies, about 30 have been caught there and others have been documented in places in between.

Monarch spring migration is not as direct. The first generation to leave Mexico stops to mate along the way where milkweed is growing and it is their progeny or later generations that make it the rest of the way north.

Afterward, we stopped at CMBO’s Northwood Center, buried in the trees, where we saw an incredible display of bird watching and feeding equipment. The woman running the gift shop cleaned and adjusted my binoculars for free—as advertised—but told me I really should get new ones. The pay from about a year’s worth of Bird Banter columns would buy a nice pair I saw on display.

We were only in Cape May a few hours, long enough to get my feet wet in the Atlantic (and my shoes and socks—thanks, Sis!) and vow to come back someday. However, it is good to be home again in the land of broad landscapes and straight-forward highways—and where wet things dry out in a quarter of the time.