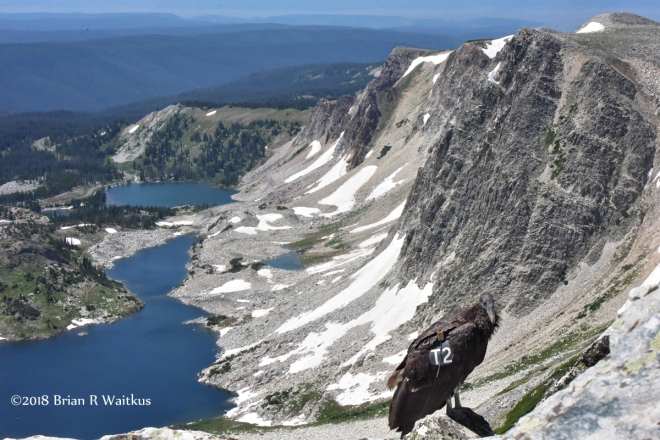 Published Aug. 19, 2018, in the Wyoming Tribune Eagle, and at Wyoming Network News: https://www.wyomingnetworknews.com/condor-visits-wyoming-next-condor-needs-to-find-steel-instead-of-lead.

Condor visits Wyoming; next condor needs to find steel instead of lead

Exciting news in the Wyoming birdwatching community: A California condor, North America’s largest raptor with 9.5-foot wingspan, was sighted July 7 west of Laramie perched on Medicine Bow Peak. The reporting birder was Nathan Pieplow. He is the author of the Peterson guide to bird sounds. Maybe he recorded it.

Wing tags printed with a big T2 declared this was a female condor hatched and raised in 2016 at the Portland, Oregon, zoo and released in March at the Vermilion Cliffs National Monument in northern Arizona.

Several people from the Laramie Audubon chapter climbed up to see the condor. Brian Waitkus got excellent photos.

Medicine Bow Peak, elevation 12,014 feet, is a popular destination for hikers who want a challenge including lightning and boulder fields. As many as a dozen hikers were congregating near the condor July 9. The condor didn’t mind people but was flushed by three dogs off leash, observed Murie Audubon president Zach Hutchinson.

T2 was outfitted with wing tags and transmitter by the Peregrine Fund before her release in Arizona in March 2018. Photo courtesy of Brian R. Waitkus.

T2 was one of many condors released into the wild by the Peregrine Fund working to re-establish the population of this officially endangered species. In 1982 there were only 22 birds left. Today there are 500, half flying free in Arizona, Utah, California and Baja Mexico. Some are now breeding in the wild. For more, read Condors in Canyon Country by Sophie A. H. Osborn and https://www.peregrinefund.org/.

The distance between the Arizona release site and the peak is only 440 miles as the condor flies, not difficult for a bird that can travel 200 miles a day. T2 was spotted earlier, on June 28, near Roosevelt, Utah.

The closest previous Wyoming condor sighting was 1998, in Utah at Flaming Gorge Reservoir, which spans the Utah-Wyoming line.

T2’s visit was brief. A Peregrine Fund researcher following the condor using telemetry later got the signal 30 miles away indicating the bird was not moving. By the time he arrived, the bird was dead. It’s been sent to U.S. Fish and Wildlife Service for autopsy. Foul play was not suspected.

Serendipitously, soon after the first news broke about T2, Chris Parish, director of global conservation for the Peregrine Fund, was about to drop his daughter off in Laramie. He offered to give a talk on condors sponsored by the Laramie Audubon Society and the University of Wyoming Biodiversity Institute.

In his presentation, Chris touched briefly on the history of restoring the condor population.

Condors are tough. They survived the large mammal extinction 10,000 years ago. However, they are slow to reproduce, only one chick every two years. At propagation centers, experts can get a pair to lay an extra egg to put in an incubator.

Condors live 50 to 60 years by avoiding predators and finding new habitat. A few are still being shot, despite condors being as harmless as turkey vultures, eating only carrion–already dead animals. They fly into powerlines and get hit by vehicles too.

The biggest problem for condors is poisoning from lead ammunition, Chris said. When a deer is shot, the bullet disintegrates into hundreds of fragments. Often, the fragments are in the gut pile, or offal, that hunters leave in the field. Offal is the condor’s main dish.

All those little lead fragments add up and eventually cause lead poisoning. Some of those lead fragments also find their way into game meat people eat. Researchers try to check the blood lead levels of all free-flying condors once a year and treat them if necessary before releasing them again.

Our national symbol, the bald eagle, also feeds at carcasses. In 1991 lead shot for waterfowl hunting was banned but upland animals—and birds like the eagle–are not protected.

Arizona Game and Fish Department a few years ago asked hunters on the Kaibab Plateau, where condors are released, to voluntarily use steel ammunition or to remove offal. They offered each participant two free boxes of steel ammunition. Participation is now at 87 percent. A similar program is nearly as successful in Utah. California has banned lead ammunition since 2008, said Chris.

The Peregrine Fund holds shooting trials and gives away steel ammunition for hunters to test. Chris, a lifelong hunter, spouts ballistic statistics with ease. The bottom line is that lead and steel ammunition of comparable quality are nearly the same cost. However, manufacturers need encouragement to offer more variety.

Chris also said that yes, steel ammunition takes a little practice for the hunter to become proficient with it, but practice is required any time a hunter switches to the same caliber ammunition made by a different manufacturer.

Steel bullets aren’t silver bullets for all wildlife problems. But maybe Wyoming can join the steel states. That way we’ll make it safer here for when more condors show up. 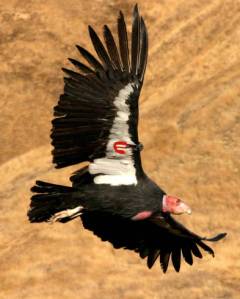 Published Feb. 16, 2005, in the Wyoming Tribune Eagle, “Are condors coming closer to home?”

2014 Update: Condors continue to recover, except for the problem of ingesting lead shot. No records of condors in Wyoming are mentioned in Faulkner’s “Birds of Wyoming,” c. 2010.

If seeing is believing, can you believe what someone else is seeing?

In January someone reported seeing a California condor in the Alcova area. The news was reported second hand on the Wyobirds e-list with a follow up of another second hand report about a second person’s observation.

As I usually do when confronted with obscure or unusual species, I always check the latilong records in “Wyoming Birds,” by Jane and Robert Dorn.

No condors are listed in the Dorns’ second edition, or in the 2004 edition of the “Atlas of Birds, Mammals, Amphibians and Reptiles in Wyoming” available from the Wyoming Game and Fish Department. The Wyobirds posting refers to two Wyoming records, and although I’ve sent an inquiry about them to the author of the posting, I have yet to receive a reply. When I asked Jane, she thought one of the records referred to was one so very old that it was impossible to establish the credibility of the witness.

Greg Johnson, a local wildlife biologist with a good network of professional contacts, remembered hearing about a condor seen at Flaming Gorge awhile back.

The California condor is an endangered species. Ten thousand years ago it ranged across the southern United States, but by the time of European settlement it was found only in a coastal strip from British Columbia to Nuevo Leon, Mexico.

By the 1930s it was confined to central California. The last wild condor was trapped in 1987 and joined 26 others in a captive breeding and reintroduction program in California.

Some of the condor’s survival problems still exist: collisions with power lines, shootings, lead poisoning from feeding on carcasses of animals that have been killed with lead shot as well as the killing of young condors by eagles and coyotes.

However, a reintroduction effort in northern Arizona begun in 1996 has been very successful. Condors released there are courting, nest building and in the last two years have fledged three young birds.

Apparently, one of the Arizona birds, Condor 19, took a two-week trip north in August of 1998, following the Green River. In the Peregrine Fund’s archives of field notes, researcher Shawn Farry reports being contacted by Loren Casterline, an adult who was with Varsity Scout Troop 1834 at Kingfisher Island in Flaming Gorge Reservoir Aug. 6. The site is in Utah, five miles south of the Wyoming line.

While the scouts swam, the condor left a perch 100 meters away and landed within several meters of Mr. Casterline (condors are known to be curious about humans), but then his movement caused her to take off over the lake. A Fish and Wildlife Service news release mentions “Flaming Gorge, Wyoming,” so perhaps there was another observation.

Condor 19 returned to the Arizona release site seven days later, making a total round trip of at least 600 miles.

The US Fish and Wildlife Service agent in Casper, Dominic Domenici, contacted Arizona about the new reports and learned that the whereabouts of two immature condors was unknown.

Condors are fitted with two radio transmitters–one on each wing–but ordinary radio telemetry used for locating wildlife doesn’t work for a species capable of ranging as far as the condor. As funding becomes available, one of the transmitters is replaced by a solar-powered, satellite-based one that reports Global Positioning System fixes, or locations.

Locations are transmitted every hour through the day and then the data is e-mailed every evening to researchers, conveniently plotted on a topographic map. Apparently, the missing condors are not wearing the improved technology. How likely is it a condor has visited the middle of our state? Unlikely, say the Arizona researchers, but not impossible.

The second observer is said to have been able to make a direct comparison with a nearby eagle, but depth of field can play tricks. None of the other Casper birders combing the area saw any condors.

Turkey vultures have a wingspan of 5 1/2 f feet, eagles, 6 1/2, while the condors are at 9 1/2 feet. Though condors have a red-skinned head devoid of feathers like the vulture, their bodies are, at 46 inches long, 20 inches longer than the vulture’s.

Adult condors have a black and white color pattern under their wings that is the reverse of the silver and black pattern for vultures. Immature golden and bald eagles have white underwing markings, but an immature condor has none.

The way to make a rare bird report more creditable is to have more people see the bird and to photograph it. At this point, the sightings remain unconfirmed. If a formal report were to be submitted to the Wyoming Bird Records Committee and accepted, what would it mean? It would mean a condor has scouted the neighborhood. Whether or not it leads to return trips and breeding records for a future edition of the Atlas, only the condors can tell.

Atlas of Birds, Mammals, Amphibians and Reptiles in Wyoming, http://www.gf.state.wy.us, see nongame heading on the right side of the page. A CD of the Atlas can be requested by calling the Lander office, 800-654-7862.