Pete Dunne’s preferred habitat is the hawk watching platform at the Cape May Bird Observatory in Cape May, New Jersey. Courtesy Wikipedia.

Published Dec. 16, 2012, in the Wyoming Tribune Eagle, “Nationally known birders have nothing on birds, the true celebs.”

2014 Update: In September our local Audubon chapter celebrated its 40th anniversary and was fortunate to be joined by John Fitzpatrick, director of the Cornell Lab of Ornithology, and Ted Floyd, editor of Birding magazine, flagship publication of the American Birding Association.

Studying birds in your field guide will help you identify them when you finally see them in the field. But don’t neglect to study the author photo on the back cover—you never know when you’ll have a chance to identify them as well.

Over Thanksgiving, Mark and I attended a family wedding in Philadelphia. One of my new shirttail relations, John, is a birder and came with us to Cape May for a day.

The southern tip of New Jersey has long been recognized for its numerous and varied migrating birds and has lots of public access for birding. We stopped at the Cape May Bird Observatory hawk-watching platform first, figuring that official migration observers might still be around and help us Westerners and John, an Irishman living in England, identify local birds.

The first ID I made was that the observer on deck was Pete Dunne, author of several books I’ve reviewed for this paper, including “Pete Dunne’s Essential Field Guide Companion” and the first three of his seasonal quartet beginning with “Prairie Spring.” He’s also a co-author of “Hawks in Flight,” along with other entertaining books and articles for birding magazines.

Pete’s day jobs are director of CMBO and chief communications officer for New Jersey Audubon Society. But they let him out of the office to count birds. He can distinguish a turkey vulture from a black vulture, even when they are mere specks overhead. Without his help, we would not have identified the red-shouldered hawk or determined that the Cooper’s hawk in flight was not a sharp-shinned.

If you go to bird festivals, you too, will meet nationally recognized birders. Nearly 30 years ago, I shook hands with Roger Tory Peterson at a National Audubon convention. A few years later at another one, I correctly identified, from a distance, without using binoculars, the man in the middle of a flock of middle-aged women as author Kenn Kaufman.

But we met Pete at home, in his own habitat, with no printed agenda or groupies to indicate his status. 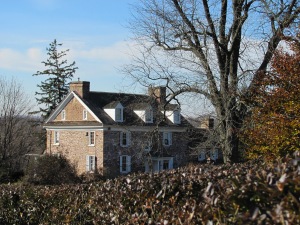 The next day we visited the John James Audubon Center at Mill Grove, in Audubon, Penn., where one of the world’s most famous bird artists lived when he first came to the U.S. in 1803 at age 18. Hiking the trails around the house, now a museum, through the woods and fields overlooking Perkiomen Creek, I was able to add a singing Carolina wren to my life list, imagining Audubon first hearing it here as well.

A week later, the wedding couple, my uncle and my new aunt–both knowledgeable birders–were able to refind Pete on the same deck at Cape May.

Pete remembered the three of us from the week before, and conversely, said the sighting of Wyoming birders was a lot rarer event than meeting John, even though he came further. There are just over half a million Wyomingites, after all, compared to 62 million Brits. Many of us from the Cowboy State, by nature of our choice of residence, and especially those attracted to birding, prefer travelling to remote places rather than congested coasts.

We were too late to meet superstar storm Sandy, luckily. Cape May was untouched because Sandy landed some miles up the coast at Atlantic City where she devastated Brigantine National Wildlife Refuge and the barrier islands.

We still noticed Sandy’s damage in the suburban-rural area north of Philadelphia, mostly toppled pines and hardwoods, including one that impaled the second story of a house.

What happens to birds in severe storms? My aunt forwarded a New York Times article by Natalie Angier, published Nov. 12, reporting how perching birds have toes that automatically lock around a branch when they bend their legs. So they are as safe as the branch they sit on.

Angier reported birds feel the changes in air pressure from an approaching storm and those migrating may steer around it or correct course afterwards. Some get a boost, having been documented as flying into a storm at 7 mph and coming out the other side at 90.

No matter how many well-known birders I may meet, the birds are the true celebrities. The migrants propelling themselves over dangerous distances, as well as the ordinary house finch weathering another winter, are to be celebrated.

So if I attend the National Audubon convention in Stevenson, Wash., in July, I will be sure to identify the keynote speakers, but the local birds will be the real stars.